“My experience with Kim and New Day Consulting was absolutely wonderful. Kim understood my wants and needs and provided me with franchise options that suited them. She then guided me through the entire process and provided great advice. With Kim I felt as if I had my own agent representing me during a very complicated process. I would recommend her services to anyone considering becoming a franchised business owner. I would not have found the perfect franchise for me had it not been for her services”
Jon Parkman

“This may seem a little over the top but it is not.  Every once in while we come across someone who just “gets it”.

Somebody who listens and then goes not just an extra mile but as far as it takes to get the job done.  Kim Bonner with New Day Consulting Systems is one of those people.

From the first conversation to the last I left feeling her goal truly is for me to be happy and successful.  She uses her life experience and skills and is as authentic and genuine as I have ever seen.

Kim gives so much value I was left feeling and asking myself “what can I do for her?”

Thanks Kim, you are a breath of fresh air in the business environment.”

“I was a member of the Advisory Council of the [University of Maryland Global Campus]’ Center for Intellectual Property during the time that Kimberly Bonner led the Center.  I was very impressed by her understanding [of] IP and technology. “

“Working with Kimberly and the Broward Small Business Resilience Group has been eye-opening as a professional in the small business space. COVID-19 devastated Broward’s hospitality industry, and no one but the group was working to solve the issues facing Broward hospitality businesses. I’ve seen this group lead initiatives to support this industry, such as working with Broward’s Office of Economic and Small Business Development on hospitality-focused programming in 2020, supporting local crowdfunding campaigns, and offering online networking opportunities for industry professionals. It’s been a pleasure to support the group’s efforts and see their impact in Broward County. “

“After staying home for two years due to health issues, I was wondering how to start my career all over again.  At that time, Kimberly Bonner offered help to search for a suitable franchise opportunity for me.  After careful research, I realized the number one choice Ms. Bonner presented to me was the best one for me. Her years of experience was tremendous help for me to select this career path.  And her  support along the process made me feel that she was always on my side and worked in my best interest.  I would like to express my heartfelt gratitude to Kimberly Bonner and New Day Consulting Systems for leading me into this new exciting career.“

“I am D. Yvonne Rivers, CEO of Phoebe Marketing Group established in 1997 as a business development, marketing ,training and strategic planning company headquartered in Washington, DC. It has been my pleasure to work with Kimberly Bonner of New Day Consulting Systems  as a Pitch Competition Judge.

I am the Creator and Producer of DC Shark in 2015 , American Dream Business Pitch Competition in 2017 and African Dream Business Pitch Competition in 2018. Kim has been on many panels of Judges for my Pitch Competitions  including  Women’s History Month Pitch at Microsoft, IN3DC Incubator with Howard University and Washington, DC , City of Alexandria, Virginia Redevelopment and Housing Authority Small Business Pitch Competition
Kim was also on a distinguished panel of Pitch Competition Judges for a LIVE television production trailer being pitched to television networks along with Monique Greenwood, former Essence Magazine editor and CEO of www.awaakaba.com, bed and breakfast inns, Warren Love, CEO of www.cakelove.com and former Food Network star and  Steven Bullock , Entertainment Attorney.
We at Phoebe Global are proud to have coached businesses who have appeared on ABC Network Shark Tank garnering 6 figure deals from Sharks. We have hosted Pitch Competitions across the globe including at the Carnegie Library during Congressional Black Congress Week, BIZ Works Pitch at National Harbor  Maryland and Microsoft in Nairobi, Kenya in 2022.
[Kimberly Bonner and I] had the opportunity to work as Pitch Coach with Michelle Singh from a cohort of YWCA 360 program to develop her winning Pitch and Pitch Deck to win $12,000.  Michelle [was also] a semi-finalist in a $50,000 Pitch Competition.”
Yvonne Rivers

“Kim Bonner is an innovative and creative professional. Her speaker development consultation helped create one our most successful productions of the signature Excuse Me, That’s My Seat Conference hosted by the Women’s Council at the Greater Fort Lauderdale Chamber of Commerce in its history. Kim has a plethora of experience coupled with a keen sense of current trends. On time and always on point, she’s an invaluable resource and an asset to any production team. Highly recommend!”

“Our instructor [for WE360] Kim Bonner was absolutely phenomenal. She was very knowledgeable and very transparent. She took her time with each student in the cohort. I personally had the opportunity to work with Kim in October of 2022 when I became a finalist in the Miami Dade County Biz-up Pitch Competition. Kim helped me structure and perfect my pitch. By following her suggestions, I was one of the winners to receive the $50,000 prize for my Business Pitch.“ 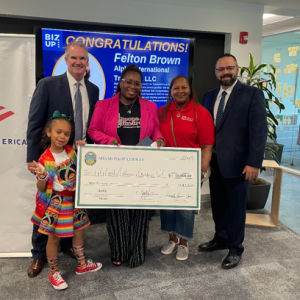 “Kimberly Bonner is just what I was looking for in an advisor before I knew I was looking for one. If you want growth and results, but are not sure of which path to take … do yourself a favor and talk to Kimberly. She can walk and talk you through the mire and provide data analysis and guide you to a solution that works.

At the beginning, I approached Kimberly to assist me with a market feasibility study on franchising my company. She was quickly down to business and in a few short months, we sat down to go over her analysis report and put together an action plan. After another six months of her patient persistence, I was ready to discuss plans to franchise my company. This was no little endeavor, and there were lots of points Kimberly made on possible directions we could or should go with the company to achieve our growth goals. She quickly evaluates options, shares her findings and helps create a direction plan.

It has now been 3 years since I met Kimberly, and so much good has happened. First and foremost, Kim has become a close family friend and business advisor who is a pleasure to speak to about all things. She has become my biggest cheerleader and a coach. She was paramount in the development of our FDD and thanks to her guidance, we are now offering franchises nationally. When I have a question or an idea she is willing to listen and ask the right questions (not just the easy ones). I fully endorse Kim as a business and franchise consultant and the results speak for themselves. If you are looking for someone that is going to be passionate about your company’s growth and be compassionate about you as a person, you will not find a better advisor.”

“I enjoy collaborating with [Kimberly Bonner]. She’s creative and willing to try new approaches, and I can be sure of effective follow-through because Kim is organized and systematic in implementation. And of course, she pays  attention to detail, so everything is done right, the first time. Our projects together, including several national conferences she organized as Executive Director of the Center for Intellectual Property (CIP) […] were successful in large part because of Kim’s thorough knowledge of the legal issues and conscientious hard work. I always looked forward to working with her.”

“I participated in the YWCA WE360 program with [Kimberly Bonner]. It was there that she introduced me to pitching. I grew in my confidence and communication skills with the help of Ms. Bonner and the pitch resources she provided. I went on to participate in other pitch competitions. I was a semifinalist in the Famous Amos Pitch competition, and I placed second in the [National P&G YWCA Level Up] Pitch competition with winnings totaling $12K. I’m grateful to Ms. Bonner for her knowledge and insight.”